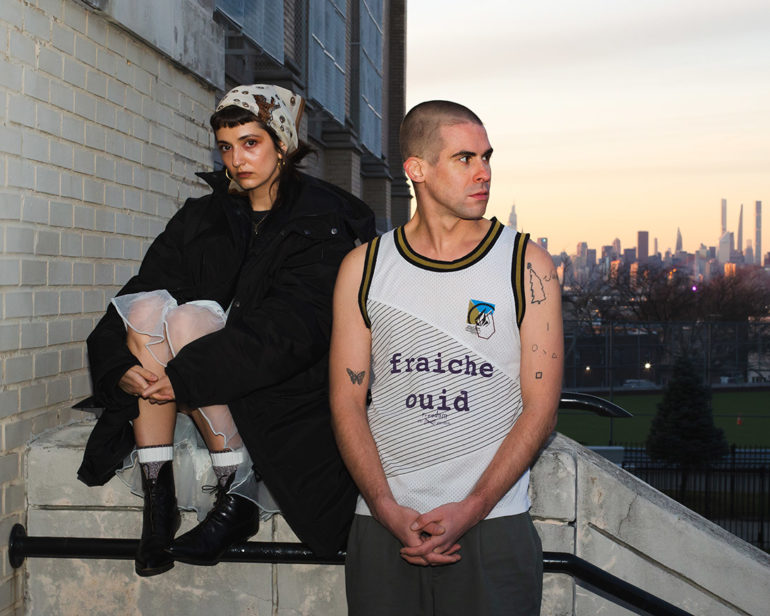 LEYA’s debut release, 2018’s The Fool (NNA Tapes), introduces many of their core elements: stillness and simple-feeling songs, the arc of the merged violin and vocals, and the beautiful, disturbed feeling of the harp’s chordal movements. There is a dirtiness to the release that is an oft-defining element in LEYA’s recorded work, an imperfect viscerality and simplicity reflected in the songs and their sound. The second half of the album features three collaborations – Eartheater, Sunk Heaven, and PC Worship – a small topography of LEYA’s world at the time and a hint at future collaborations to come.

In 2019 the group released a collaborative EP with Eartheater aka Alexandra Drewchin titled Angel Lust (PAN). Drewchin provided vocals while LEYA occupied a mostly instrumental space, with Markiewicz singing only on the EP’s final track. The release marked an important alternate setting for LEYA, adapting the bent romance of their language to serve with another artist at the center. Eartheater’s treatment of the material feels pop-leaning but with a cinematic sense of magic; its four songs ebb with peaks, valleys, and eventually a satisfying lull. This shared space would become a consistent thread within their respective collaborative spheres for years to come.

In 2020, LEYA released their most central statement to date, Flood Dream (NNA Tapes). It was a true honing of their sound, a record unfolding into itself. Pitchfork called it “eerie, beckoning, and tinged with horror,” a mood The New York Times likened to the “auditory equivalent of awakening in the fog of a bad dream only to discover you’re still trapped in the nightmare.” Released in March of 2020, the album inadvertently soundtracked a world thrust into dystopia and gained a cult following over the course of the pandemic.

LEYA followed Flood Dream with a number of short format collaborations. July 2020 saw the release of “Antigone,” a shared track with American transcendental black metal band, Liturgy. The duo also tapped remixes for Flood Dream from a few electronic musicians on varying ends of the spectrum – British pioneer Darren Cunningham aka Actress, Scottish innovator Drew McDowall (of Coil and Psychic TV), and American filmmaker/composer Chistina Vantzou. Each remix took its original material and broadened it in some way, slowing the elements of LEYA’s language into new space. The duo also contributed production to NY digital harcore stalwarts Deli Girls’ track “barriers to love” on their 2020 album Boss. Additionally, they were featured on Martha Skye Murphy’s 2021 EP Concrete via its title track. LEYA also saw forays into the fashion world, scoring a HoodByAir runway show in 2021 curated by rapper Babyxsosa and contributing the score for a 2022 Louis Vuitton commercial in the form of a shared track with Eartheater, “Angel Path.”

In March 2022, LEYA released their broadest and most experimental project to date, the almost fully-collaborative mixtape, Eyeline (NNA Tapes). The tape brought together 9 artists – Actress, Julie Byrne, Eartheater, Okay Kaya, James K, claire rousay, Deli Girls, Sunk Heaven, and Martha Skye Murphy, each of whom co-wrote a track with LEYA, with the exception of Cunningham, who provided an 11 minute remix of the duo’s only solo effort on the mixtape, “Dankworld.” The tape exists squarely in LEYA’s unique sound world, but stretches its confines greatly amongst many twists and turns. It channels pop environments previously untouched by the duo and also reaches more sinister caverns at points, hinging on an intensity that has been growing throughout the duo’s career. It further broadens the possibilities, a sense that any direction that might be possible for a group continually pushing the boundaries of visceral song.