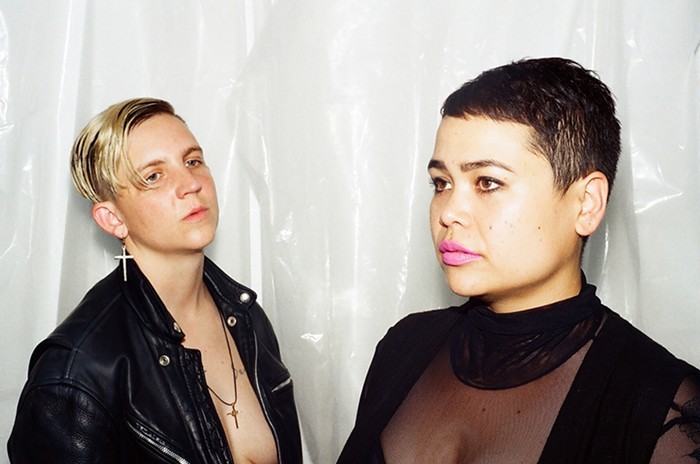 Chasms was formed in 2011 by Jess Labrador and Shannon Madden. Following 2016’s ‘On the Legs of Love Purified’ and the recent “Divine Illusion” single, ‘The Mirage’ pushes the band’s ethereal sound into the murky depths of dub. Marking a sonic shift for the project, ‘The Mirage’ finds the duo trading in chaotic bursts of noise for understated minimalism that’s still characteristically melancholic and potent with emotion. Labrador’s drum production is as deft as ever with an expanded range of electronic samples and tape-delay-induced polyrhythms. Layered with Madden’s persistently dubby bass, Labrador’s sparse guitar and gliding soprano float above a labyrinth of hypnotic sequences. These dub-laced dirges signify growth within the band, heard in their command of repetition, space, and effects to build a pervasive mood that’s often utterly heartbreaking.

The duo’s second LP for the Felte label, ‘The Mirage’ was conceived following major upheaval in the pair’s lives, including the loss of Madden’s brother and a number of the band’s friends in Oakland’s Ghost Ship warehouse fire in 2016. Compounded with the dissolution of a marriage, and leaving San Francisco after more than a decade to relocate to Los Angeles, the album is an exploration of grief and the multi-faceted heartbreak that follows such events. What we think we see, what we think we know to be true, how we think life will turn out, the plans we make – all reduced to an illusion when someone you expected to be alive tomorrow is gone, when plans fail, when the mask is removed, and you are left simply to be.

Mixed by Josh Eustis (Telefon Tel Aviv) and mastered by Rafael Anton Irisarri, ‘The Mirage’ tells candid narratives of a heavy heart but does not wallow in despair. At times, the album even offers danceable moments as in the entrancing, textural “Every Heaven in Between” with its restless techno and house-inspired four-on-the-floor beat. Sliding guitar chords and a smoky bass line wade between rhythmic pulsing and a booming kick in the narcotic “Shadow.” A transformative assemblage of songs, The Mirage is a powerful reflection on the events that shatter and shape our lives.