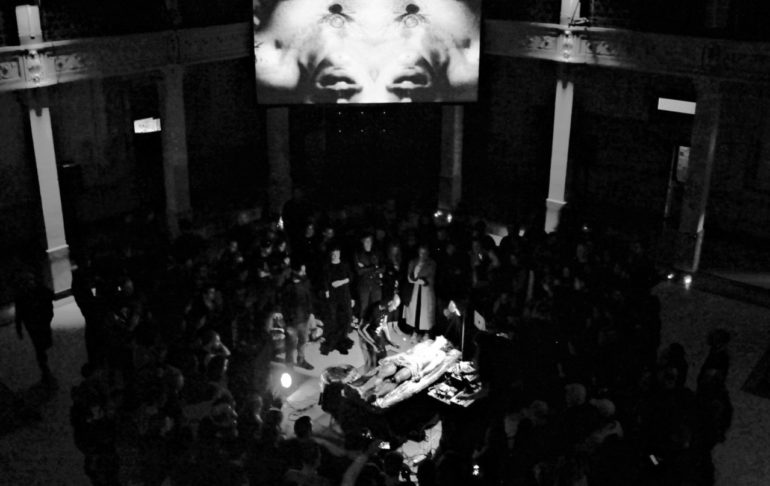 B.O.R. is a ritualistic post-tattoo practice started by Michele Servadio in 2014. B.O.R. is a contemporary ritual where tattooing turns into sound. B.O.R. is a sonified and amplified tattoo. B.O.R. is a technique of subjective reconfiguration through pain, sound and a permanent mark on the body. B.O.R. translate into a sign a process that takes place along several frequencies, manifesting itself in many dimensions.

The artist pauses his machinery. Rubs his black gloves over the tattoo as though closing the eyes of the dearly departed. The soundscape cannibalises at its core as Servadio checks his subject. Lips to lobes, in whisper, as it howls like a fiend in the fields of nightmares. Her leg’s a mess of ink now, like deep waters muddied by cephalopod excretion, but she smiles. Licks her lips. Raises her chin though stealing breaths of consciousness above the waves.

Emboldened now, like the heart of a beast, the music pumps-blood into the veins of the crowd who howl climatic. Like a giants footsteps, the music is heavy as headaches, as Servadio makes painters’ flourishes across his canvas of flesh. Running now, the giant, far away in a discombobulating dystopia of sound.

An avalanche is brewing. Waves are crashing. She arches her back with each touch, the agony her only point of reference. Lost.