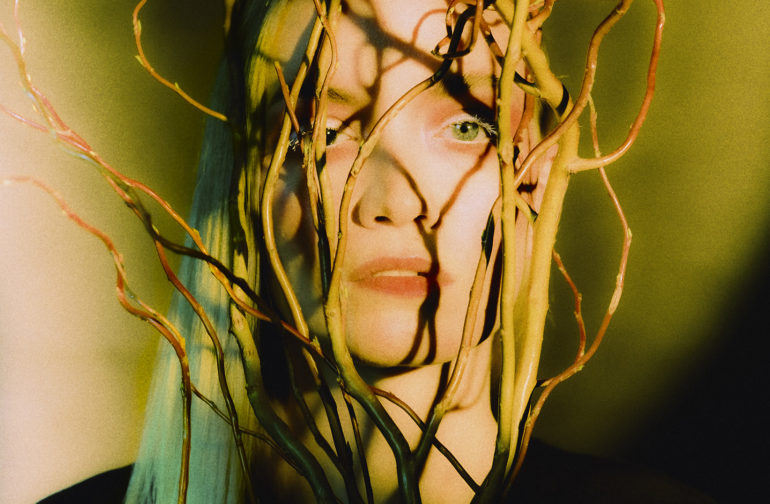 Zanias is the sometimes solo and often collaborative project of Alison Lewis, an Australian-born multidisciplinary artist with a background in archaeology and keen interests in anthropology, psychology, neuroscience and entheogenic exploration. In 2011, while studying in London, she crossed paths with Ryan Ambridge while playing a minimal synth DJ set at a bar in Camden, and darkwave history was made with the formation of Linea Aspera. After the project’s swift ascent into underground recognition, largely due to the captivating quality of Alison’s voice and carefully crafted emotive lyrics, it went on indefinite hiatus in 2013, and she then teamed up with Sid Lamar of Schwefelgelb to form Keluar. It was in this collaboration that a fierce DIY spirit was forged, as the band booked all their own tours, made all their own videos and even created their own custom merch by hand. This became a template for all of Alison’s future endeavors: controlling all facets of creativity with total authenticity.

After relocating to Berlin, she co-founded the Fleisch collective with new friends & artists Phase Fatale, Agency, Halv Drøm, LGHTWGHT and Primary. Over the next six years they hosted a basement breeding ground for what would become the world standard of the Electronic Body Music revival, and eventually founded the Fleisch record label that went on to release some of EBMs most progressive and distinctive artists: Forces, Kontravoid, Imperial Black Unit, Reka and Fractions.

It was in 2014, following psychedelic-induced revelations of the fragility of existence, that Alison committed to music full-time and made the decision to take control of her creative output through a single entity, and so Zanias was born. Her debut EP, ‘To the Core’ (Noiztank, 2016), was co-produced with her mentor and close friend Alex Akers of Forces, and featured what would become core components of Zanias’s sound: body music percussion, multi-layered ethereal vocals and a heavily atmospheric approach to production and performance.

‘To the Core’ was followed by a full-length album, ‘Into the All’, (2018, Candela Rising) through which Zanias and Alex treaded further into the tropical rainforests of Zanias’s upbringing and spilled forth a parable for humanity’s spiritual evolution (a philosophical healing process for the trauma of learning some heavy things too soon) in an ethnic fusion of ethereal body music and darkwave.

Between her own releases Zanias flowed with a steady current of collaborations, including an ongoing association with Black Rain which involved appearances on their releases on Blackest Ever Black as well as joining the band on stage at Bozar Electronic Arts Festival in Brussels for a largely improvised set. Her voice, awash with reverb, proved an effective addition to euphoric moments in the darker realms of techno, and so it resonated frequently through the aural pillars of 4/4 kick drums via the works of techno heavweights Dax J, Kobosil, Ancient Methods, I Hate Models and Nur Jaber. In April 2019 her techno affiliation culminated in the showcasing of her live set at Berghain’s Klubnacht, alongside Regis and a cohort of Monnom Black artists, whom she also joined on the label’s compilation releases in 2018 and 2019.

In 2020 she self-released two entirely self-produced and engineered EPs, ‘Extinction’ (Fleisch Records, 2020) and ‘Harmaline’ (Rune & Ruin, 2020), just as the world as we knew it came to an end. ‘Extinction’ in particular had come at a serendipitous time: a body music lament of climate anxiety completed at her family home in Queensland during the deadly 2019 bushfire season. With all tours cancelled by a virus seemingly unleashed by environmental degradation, and despair for the future mounting, Zanias threw herself into production once again and emerged from the first pandemic lockdown with a second album, titled ‘Unearthed’ and released on Fleisch Records in 2021, along with a set of self-produced music videos.

Zanias’s work has always been defined by a search for higher meaning, an exploration into the modality of human feelings and how these complex experiences of consciousness play into our evolutionary story as a species. Writing and performing through sound is her way of simultaneously investigating her psychological interests and ultimately basking in awe of music’s intrinsic connectivity. By fusing our emotions with vibrations we can share deeper realms of our experience than we even can through language – another vehicle for connection that she employs with acuity, through lyrics that are deftly woven for flow and imbued with multiplicities of meaning.

In 2023 Zanias will release her third full-length album, also produced entirely on her own and featuring the bass guitar work of her co-conspirator Laura Bailey aka Neu-Romancer. The new album represents a huge step forward in her production style, and the truest expression of Alison’s musical spirit thus far. Zanias remains an ever-evolving expression of vulnerable and authentic emotional catharsis, unbound by any predetermined desire to fit into any particular place. As with all her work from 2020 onwards, this new album shall be self- released.