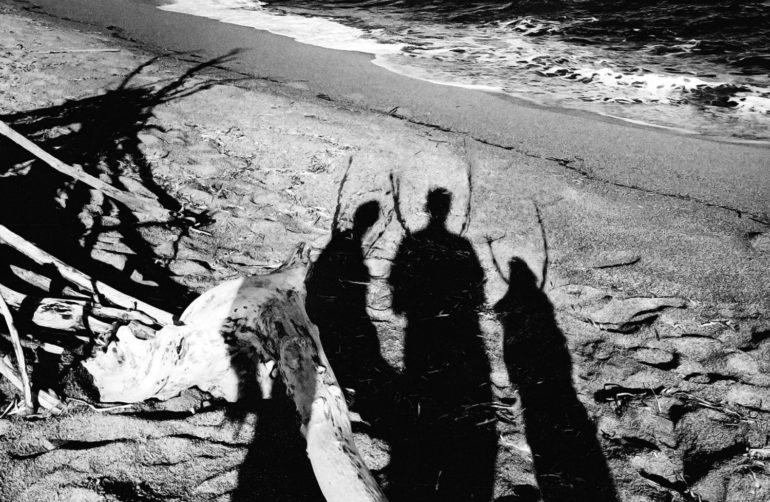 “Stroh Zu Gold” was officially presented to a selected audience during the Roadburn Redux Festival in April 2021 as a streamed live show from the stunning location UT Connewitz in Leipzig, a more than 100 years old cinema. The response was just overwhelming and the band left the crowd mesmerized. A first, handmade edition of the album on vinyl sold out yet while the concert was still streaming and was out of print before it was over.

Following Tony Conrad’s concept of maximalism in minimal music, Trialogos widescreen super 8 soundscapes and occasional haunted house vocals conjure up visions of winter lost beaches, bats dancing upside down and sojourns in permanent dawn. What we hear in these “trialogues” is one word sounding through the other. Like in a doubly exposed photograph, the individual elements become both more ethereal and more defined. They touch and blend, align and dissociate at the same time and take on the remarkable capacity of ghosts: the ability to inhabit one another, one voice speaking through the other.

Multi-instrumentalists and adventurous, Trialogos switch between roles. The trio comprises Conny Ochs (acoustic & electric guitars, vox, bass, drums, percussions), Sicker Man (acoustic & electric cello, guitars, Juno 6, Moog, lapsteel, beats, effects) and Kiki Bohemia (Rhodes, vox, bass, dictaphone, autoharp, effects), each of them coming from different musical backgrounds and experiences. While singer-songwriter and visual artist Conny Ochs is a troubled troubadour of the special kind, who gained massive recognition for his highly praised collaborations with Wino from Saint Vitus, Sicker Man works as a composer and producer for film and theatre scores and explores the musical fields in between experimental pop, noise and instant composition, using and processing the cello as his main instrument. His movie score for Simon Barrett’s (You’re Next, The Guest) directional debut “Seance” will be released through Lakeshore Records on May 28th, 2021. The third corner point of the mystical triangle is represented by Kiki Bohemia, a singer and autodidactic player of lost & found instruments and toys, who is also Sicker Man’s longtime partner in a variety of projects, such as the doom duo Slutty Clowns. The idea for a collaboration first came up in an underground backstage room at the Zukunft Club in Berlin, where Sicker Man, Kiki Bohemia and Conny Ochs shared the stage for a concert. So the three of them got together for the first time in an experimental improvisation as part of an art exhibition in Sassnitz, Germany during the summer 2020. Things led towards what is now Trialogos.

“The friend of the hermit is always the third one: the third one is the float which prevents the conversation of the two from sinking into the depth.”
Friedrich Nietzsche, from ‘Thus spoke Zarathustra’