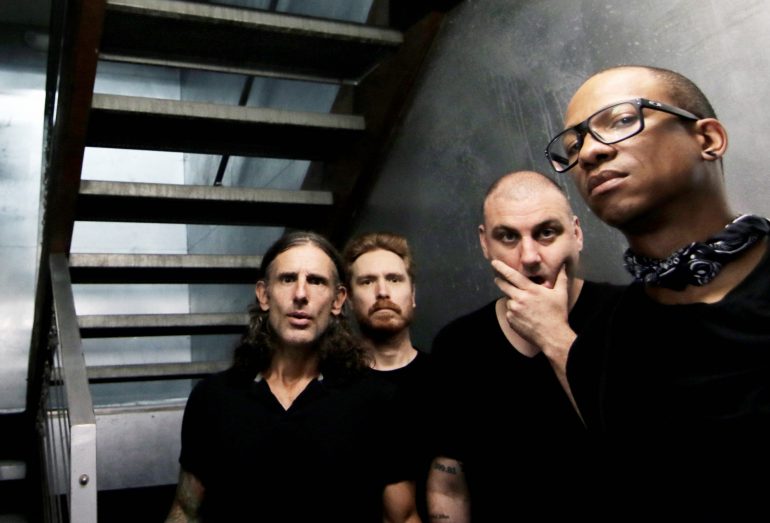 Noise Rock pioneers, Eric Paul (Arab On Radar, Chinese Stars, Doomsday Student), Paul Vieira (Chinese Stars, Doomsday Student), and Nathan Joyner (Some Girls, All Leather, Hot Nerds) venture through uncharted territory with their new band, Psychic Graveyard. The band’s debut single, Dead In Different Places – set to be released November 30th, 2018 through SKiN GRAFT Records – exemplifies the raw tapestry of sounds that characterize the new endeavor. Nathan Joyner’s grinding synths and “found sound” buries the seed of each song deep into the fertile ground – while Paul Vieira’s manic, fuzzed-out guitars and Eric Paul’s obsessive lyrics shower the proceedings with equal parts sunshine and rain.
The band released its debut album, Loud As Laughter, in May of 2019. According to the band, the process of writing the album was unusual for them. Throughout 2018, San Diego-based Joyner would send files filled with the skeletons of songs to Vieira and Paul in Providence, Rhode Island. The two would add their parts, and then the songs would undergo an arduous, back and forth until all of the members agreed on the final version. The distance of the members and the anomalous approach to writing resulted in a diverse, yet coherent album that picks-up and drops-off the listener at dramatically different places. Like nerve endings spliced and sewn back together, the process spawned a whole new auditory system – which serves as the infrastructure for Psychic Graveyard.
Psychic Graveyard are quickly following up their debut album with a new 5 song EP titled, “The Next World. On this release, the band takes many new risks and marks a startling leap forward.
According to the band, the process of writing “Loud As Laughter” involved constant exploration – at points the album focused heavily on guitars and live drums, at others – the songs were constructed primarily with synths, found sounds and synthetic beats; but with the “The Next World” EP all of these disparate elements have coalesced into a cohesive, unmistakable sound.