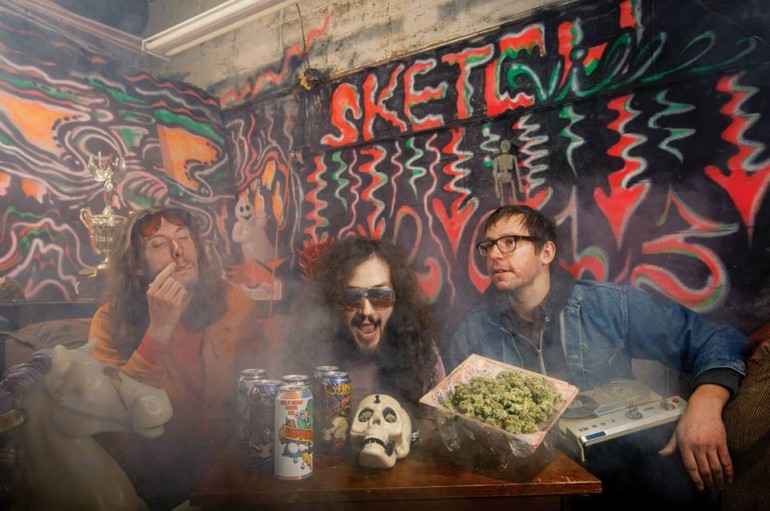 Oozing Wound is Zack Weil (guitar, vocals), Kevin Cribbin (bass), and Kyle Reynolds (drums), young men that have established themselves in the volatile Chicago underground in a short time, playing in Cacaw, Unmanned Ship, ZATH, Bad Drugs, and countless other groups that have populated packed, sweaty basements and lofts throughout the city. Simultaneously hilarious and terrifying, their debut album, Retrash, is made for people who have no faith in melody and happiness, and no resistance to heavy riffage. This is music by and for people with a desire to slay. The band channels the inner 15 year old, offering little distinction between comedy and antagonism. As Weil puts it, Oozing Wound is defined by, “loud fucking guitar and screaming and shit. We don’t sing, and we don’t write big choruses. Anything like that gets checked by the wayside because, fuck it, it’s not us.”

Modernity is a bummer, and humanity’s drive towards its own destruction is at a fever pitch. Oozing Wound finds humor in our ridiculous habits and, by magnifying our most destructive behavior to its extreme end, allows us to laugh at the idiocy and the horror of it all. This mindset is at the center of their second full-length Earth Suck, a collection of destructive thrash that is seemingly teetering at the edge of control and collapse. Zack Weil’s guitar is reckless, his palm-muted chugs coming at breakneck speed and pinch harmonics squealing like sonic bolts of electricity. Kyle Reynolds’ drumming is unrelenting, wild and unrestrained but executed with a level of jaw dropping precision. Kevin Cribbin’s manic, mammoth bass delivers wallop after wallop of fuzzed out low-end. Oozing Wound’s energetic and expansive variation on thrash thrives on antagonistic repetition and addictive riffage, avoiding pretense like a plague. Earth Suck is the explosive follow-up to their breakout debut Retrash, which earned the band praise from the NY Times, Pitchfork, Decibel, and more.