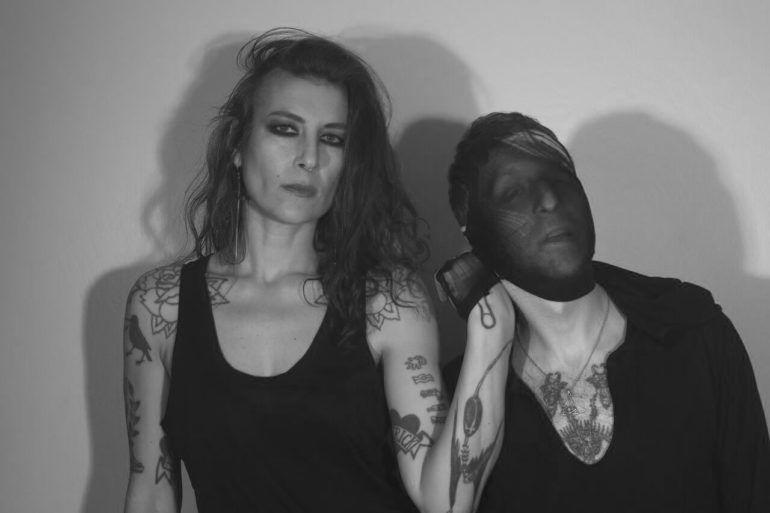 HIDE are an electronic duo based in Chicago. Together since 2014, the pair create sample based compositions using a combination of self sourced field recordings and various pop culture/media. Releases include 2016’s Black Flame ep which is dedicated to the memory of Reyhana Jabbari, a 27 year old Iranian woman who was hung for allegedly killing someone who trying to rape her, and deals with various human rights violations in Iran. HIDE’s 2017 debut album “Castration Anxiety” on Dais addresses issues of power dynamics and representation. Seething with textured yet minimal tracks, HIDE gives raw vulnerability an opportunity to unfurl, yielding an album that calls for personal autonomy and the destruction of anything barring the way.
A single on Sub-pop for the label’s singles club followed, with two unhinged tracks touching on the phenomenon of internalized misogyny and aspects of motherhood. HIDE’s second full length album “Hell is Here” on Dais is slated for release late summer 2019. The band’s sophomore release finds them trading more traditional compositions for far more incongruous and disjointed ones. The tone is sick and heavy. The band’s trademark elements, complex drum programming, stomach churning sub bass, aggressive expressive vocals, remain intact while the listener is met with something a lot less illusory and a lot more direct. The addition of sampled live drums coupled with what are mostly clean vocals brings a new organic element into the fold.
HIDE cut their teeth in the diy spaces of Chicago and have continued touring vigorously since. Last year the band toured Europe, Russia and UK in addition to multiple North American runs. Known for their energetic live performances, the duo also work as interdisciplinary artists together, creating films and visual art installations as well.