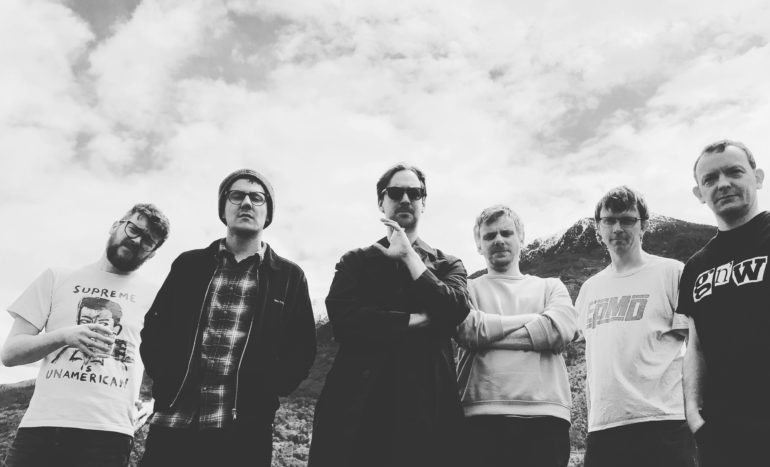 Forging a completely idiosyncratic combination of power, control, tenderness, miscontrol and more power, this six piece band active since 2003 acutely channels the best of your record collections and spit it back out into some quite astonishing shows and releases.
“Four Bibles” HC’s twelfth album was released in 2019, via Alter Records; it was recorded in Somerset, in the South West of England, by Ben Turner in between dates promoting “The Guillotine”. It’s more direct, more attack, more dynamic, more surprising.. Guesting on the album is Daniel O’Sullivan from Grumbling Fur/This Is Not This Heat.
Then it came 2020 and Dances/Curses – their lucky thirteenth record – the work of six musicians at the peak of their considerable powers of intuition and inspiration. Longterm Hey Colossus fan Mark Lanegan makes an appearance amidst the languid and sun-soaked denouement of ‘The Mirror’, the existential gravitas of his tones entirely at home in these revelatory surroundings.
Fittingly for a band who operate entirely by their own co-ordinates, Dances/Curses is released on bassist Joe Thompson’s own Wrong Speed Records (and Learning Curve Records in the US), his latest such venture in a lifetime of steadfast belief in the DIY maxim, “It’s 100% time for all bands to take control of their shit” he notes. All the tools are there to do it yourself. Back your own horse. It’s practical. It’s positive. There’s a chance things will never be the same, if change doesn’t happen now it never will.”
Somewhere on the great continuum between Unwound’s Leaves Turn Inside You and Stevie Wonder’s Journey Through “The Secret Life Of Plants”, somewhere between the dances of aspiration and the curses of reality, Hey Colossus have created their finest alchemical achievement to date.
.