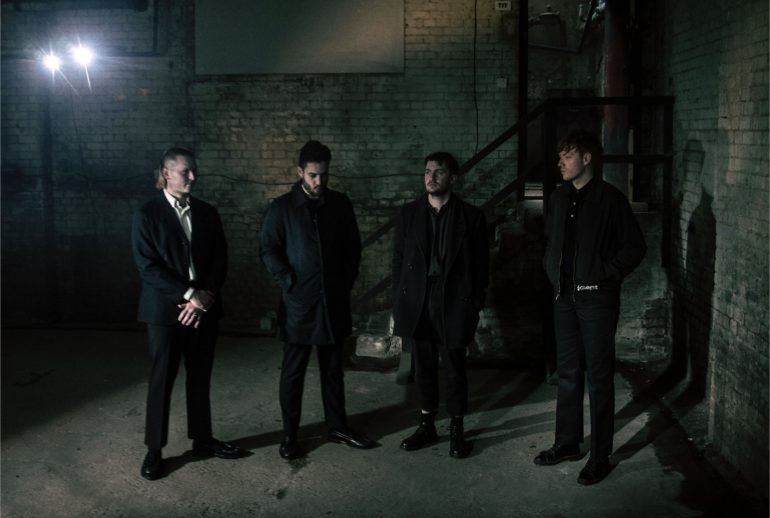 Bad Breeding, the Stevenage-based hardcore-punk foursome, call for solidarity in their fourth album ‘Human Capital’, a pointed and brutal display of aggression steeped in political awareness, out on July 8th via One Little Independent Records and Iron Lung Records in the US. Across twelve merciless tracks they attack Conservative meritocracy and the exploitative forces of late capitalism with a cacophony of blistering guitars and thunderous drums played with an intensity that refuses to abate.

‘Human Capital’ is released alongside a manifesto of sorts. Within the almost 2000-word essay, long-time collaborator Jake Farrell explains that “we are marooned on our islands of self-obsession by cultural forces that emphasise our differences, keeping us apart and suspicious of one another. It feels as though in recent years, especially during the immediate onslaught of austerity following the 2008 financial crisis, that the idea of community itself was under attack”.

Storming early tracks like ‘Community’ and ‘Joyride’ stand up defiantly for the working-class towns they feel are “constantly at the boot-end of neoliberal dogma”, fighting misrepresentation and “unattainable Tory-painted dreams, of pernicious scapegoating and punitive abuse”. Full-throttle rager ‘Prescription’ tackles the importance of sincere protest in art to prevent “the same repetitive ideas being sold back to us over and over again, until we can really envisage no alternative beyond them”. ‘Arc Eye’ looks at the process of alienation in the workplace while the album’s title track “is a summation of working life within the confines of a supposed economic meritocracy, examining those feelings of continual anxiety and uncertainty that come from juggling zero-hours work in the shadow of the mantra that anything is achievable with hard work and dedication”. Elsewhere on the likes of ‘Nostalgia Trip’ and ‘Red Flag Rising’ Bad Breeding explore the divisional tool of nationalism and its attempts to erode ties of solidarity in working towns. ‘Speculation’ and ‘Straw Men’ take aim at the grotesque hypocrisies of imperialism and focus on “the weight of big tech and how it has worn so many different faces in our lives”.

From the opener’s menacing feedback and raging distortion, across the album’s dynamic and wild time changes, through to the final ringing close of the almost optimistic ‘Rebuilding’, Bad Breeding demonstrate admirable control amongst impassioned expression. Vocals strain and guitars build in epic tension while rhythmic battles take place behind them and, despite it all, each track remains a concise tool – applied to their targets with deadly precision.

Make no mistake, Bad Breeding aren’t shouting at clouds here. ‘Human Capital’ is a savvy, conscious body of work with salient messaging. There’s no aimless finger-pointing, punching down or virtue-signalling, the band comes armed with answers. It’s an intelligent record that defies individualism and promotes community, organisation and compassion.

“Our lives are not to be managed like we are each a plucky start-up, not to be measured in the emotional profit and loss that we can extract from our relationships and those around us. We don’t need to invest time and energy on capital projects of the self on some doomed, linear journey to self-actualisation.”

Bad Breeding comprise of Chris Dodd (vocals), Angus Gannagé (guitar), Charlie Rose (bass), and Ashlea Bennett (drums). They draw influence from the original British pioneers of the anarcho-punk scene; Crass, Rudimentary Peni, and Flux of Pink Indians. Formed in 2013, the group utilized their sense of anger, Stevenage’s isolation, and the political landscape in the UK and the world as their starting point.

Their first release, ‘Burn This Flag’, came the following year via HateHateHate Records. With their live shows gaining attention for their uncompromising performances, the four-piece also headed out on tour with the likes of Eagulls, as well as playing their own headline shows. 2014 also saw them move away from labels and self-release their second single, ‘Chains’, selling it via online auction sites. Their eponymous debut album was self-released in April 2016. In 2017, Bad Breeding linked up with Hackney-based punk label La Vida Es Un Mus and US-based Iron Lung for the sophomore album ‘Divide’.

Continuing with their relentless touring schedule, the group rolled into 2018 with the announcement that they had signed to One Little Independent. With the label the perfect home for the group – which was originally set up by members of various first-wave anarcho-punk bands – Bad Breeding delivered their EP, ‘Abandonment’. This was followed by ‘Exiled’ in 2019 which was praised by the likes of DIY, Loud & Quiet, NPR, The Quietus, MOJO, Uncut, BBC Radio 1, 6Music and many more.

With ‘Human Capital’, Bad Breeding shine a glaring light on political and social injustice, revealing in all clarity the exploitation of the public by those in power.

“Every instinct in our body is primed to put ourselves first by the world we live in and sacrifice is by definition hard. Our muscles of solidarity have atrophied — withered away along with the big stories our societies used to tell themselves about the purpose of living. But there are still opportunities to exercise them again. We see examples of it all around us as people gather to place themselves between bailiffs and an eviction, give small, regular amounts of money to feed hungry people in their towns or use their time to tutor students who can’t afford the advantages of their peers. Perhaps the only benefit of the pandemic period is to prove that immense collective strength still exists in our communities.”