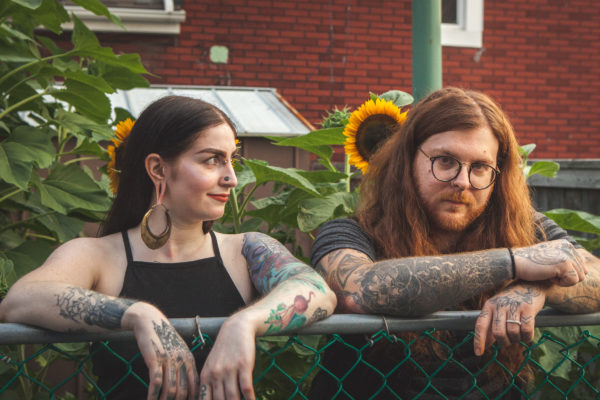 VILE CREATURE has been constantly evolving during their six years as a band; from each release to the next, the Hamilton, Ontario duo have been pushing the boundaries of their own creativity, and testing the limits of their own place in the world. Nowhere is this more evident than on their latest experimental doom metal album, Glory, Glory! Apathy Took Helm!

Constant themes throughout all VILE CREATURE releases are loss, trauma and suffering. However, it is only after first identifying the source of pain (2015’s A Steady Descent Into Soil), and then smothering it in fantastical escapism (A Pessimistic Doomsayer – 2016, Cast of Static and Smoke – 2018), that the pair have been able to process it it into something that demonstrates that catharsis can be a positive experience; that sitting with feelings of despair can in turn give way to productivity and creativity. VILE CREATURE are digging their heels in, ready to fight against the all too easy slide into nihilism – as embodied in the sardonic album title.

With a determination to push back against apathy, VILE CREATURE have confidently moulded a five track missive that is teeming with conviction and visceral emotion, and is streaked through with an emerging glow of optimism. Opener, Harbinger of Nothing (which first emerged on an Adult Swim compilation in 2019 and was re-recorded for the album) provides a jumping off point for a record that traverses a myriad of raw, real life experiences and marks a distinct new chapter for the band.

The album climaxes with the two-part titular composition which is grandiose and captivating in equal measure. Thanks to the talents of vocalist Laurel Minnes (who first collaborated with the band on A Pessimistic Doomsayer), and her choir, Minuscule, plus the additional instrumentation from Bismuth’s Tanya Byrne, the album’s split grand finale is an extraordinary culmination of the composite parts – tangible and intangible – that make up VILE CREATURE in 2020. The dichotomous nature of these twin tracks is an indicator of the band more broadly; representing light and dark, heavy and melodious. They remain embedded in the oppressive sounds of doom and metal, only now they are covered with a luxurious veil of majestic embellishments.

The threads of Glory, Glory!… can be traced back to early 2019 when both Vic (they/them, vocals, drums) and KW (he/they, vocals, guitar, drums, percussion) started to gather shards of what they would eventually compile into an album. Riffs started to accumulate and stream of consciousness words were amassed; a trip to a treehouse cabin in Northern Ontario in early 2020 cemented the final lyrics, weeks before entering the studio.
Recording took place in February, 2020 at Boxcar Sound Recording in Hamilton, Ontario, with Adam Tucker once again in the producer’s chair. With Vic’s evocative and primal vocals often taking centre stage, their marked growth in confidence as a performer is evident. By collaborating with photographer, Danika Zandboer, the trio have fashioned a striking visual accompaniment – manifesting the psychedelic and theatrical influences that become present in both audio and visual form.

That VILE CREATURE’s musical development has aligned with their own experiential evolution is not coincidental; personal and creative are tightly entwined. Having always looked at the world through a political lense, processing elements of their past (and indeed, present) through the creative output of the band has given room for growth, light, and air to reach the darkest, grimiest corners of their psyches.

Having already toured in both Europe and North America, plus performed at festivals such as Roadburn (including being commissioned for a special collaborative performance with Bismuth) and Black Flags Over Brooklyn, VILE CREATURE are gearing up for a number of live outings in support of the album. Expect to see their bold, experimental take on heavy metal in a town near you – challenging audiences to embrace positivity through the darkness.