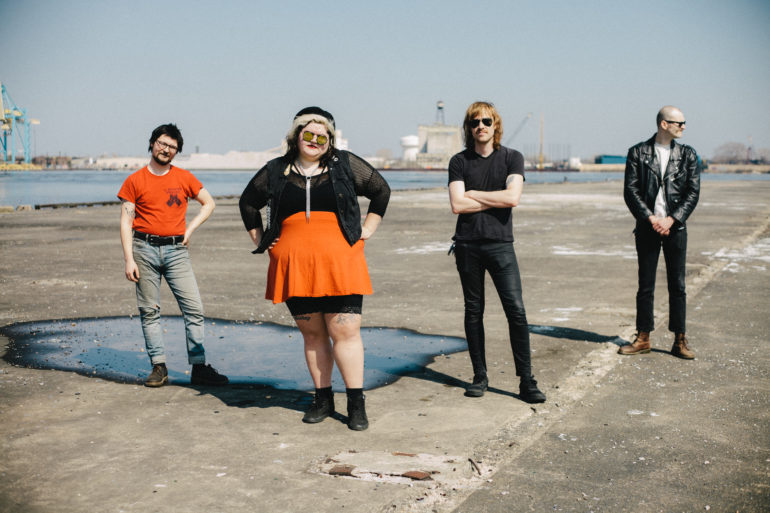 Sheer Mag’s dizzying rise initiated in 2014, when the Philadelphia band self-released the first of three 7-inches and started playing the Northeastern DIY circuit. Ironically, the music stood apart because it sounded so familiar. Indebted to ‘70s arena rock, power-pop, and proto-metal, Sheer Mag’s songs reminded a lot of us of the music we grew up with, but maybe couldn’t relate to because it was big, brash, and unapologetically macho. Sheer Mag reclaimed some of that energy without perpetuating the toxicity. On their debut album, Need to Feel Your Love (2017), the band surveyed their contemporary political landscape through the lens of history. Singer Tina Halladay transported herself back to the 1969 Stonewall Riots, denounced redlining practices that undermine the popular vote, and paid homage to White Rose activist Sophie Scholl. On paper, it’s a mouthful, but accompanied by guitarist/lyricist Matt Palmer, guitarist Kyle Seely, and bassist/producer Hart Seely, those songs became hook-laden rallying cries.

A few years ago, when the Philly quintet was stirring up well-deserved buzz with its bite-sized punk-meets–hard-rock gems, the idea would have seemed far-fetched. But after 2017’s Need to Feel Your Love, an outstanding debut LP that found them tastefully accenting their sound with R&B and funk, the band is back with a more unified set of songs that flow together in a single arc.
To be fair, Sheer Mag have always excelled at storytelling in miniature: From “Fan the Flames,” a sobering look at housing corruption in the band’s hometown, to bittersweet relationship postmortem “Worth the Tears,” their early songs often felt like end-credits tunes summing up a feature film’s worth of emotion. Here, we follow a single character, based on frontwoman Tina Halladay, through personal trials and political awakening.

A Distant Call, the Philly band’s second full-length, exemplifies their virtuosic proficiency, and sees them balance their 70s throwback sound with identity politics and personal concerns better than ever. Socially conscious in the tradition of their DIY punk community, Sheer Mag have always side-eyed the expectation that big, jocular sounds will necessarily accompany sentiments about snorting cocaine atop flaming piles of $100 bills. On this record they channel the electricity of cock rock through idiosyncrasy and vulnerability.