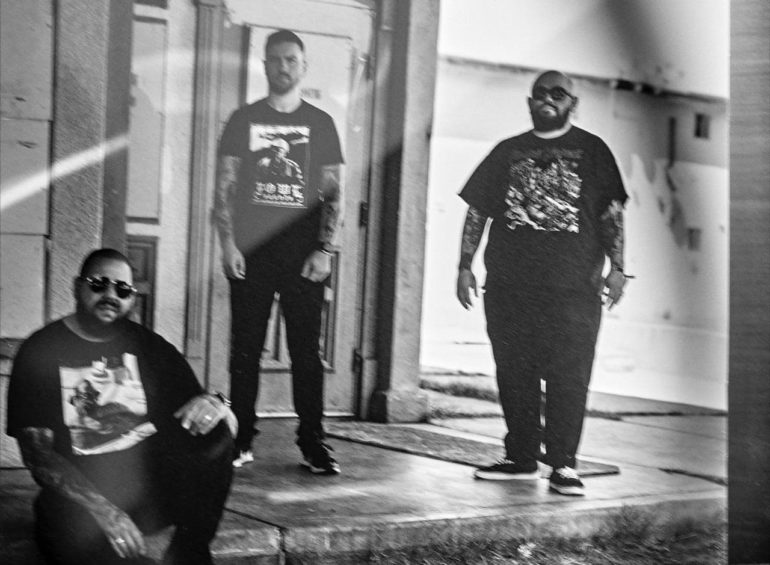 Denver’s PRIMITIVE MAN’s music matches its name: a savage, sparse mix of death metal, blackened noise, and doom. The threepiece was formed in February of 2012 by Ethan Lee McCarthy and Jonathan Campos (all current and former members of Vermin Womb, Withered, Clinging To The Trees of A Forest Fire, Death of Self and Reproacher). In October of 2012 the band recorded their debut LP Scorn at Flatline Audio with Dave Otero (Cephalic Carnage, Cobalt, Catheter, CTTTOAFF). Scorn was released a collaboration between Throatruiner and Mordgrimm Records. The band followed up with a self-released three-song EP in February titled P/M.

The unique metal hybridization of Scorn caught the attention of Relapse, who liked the record enough to sign the band and reissue the full-length in summer 2013. Dubbed a “totally malignant sounding record and one that will consume you whole if you’re not careful,” by Cvlt Nation and called “the best worst thing that has ever happened to you,” in an 8/10 review from Metal Hammer, Scorn found PRIMITIVE MAN celebrating a slow-roasted apocalypse through seven suffocating hymns of hatred, disease and sonic deviance. The record put the band on the map for many listeners, and enabled PRIMITIVE MAN to embark on a relentless touring schedule that would soon see the band playing live shows across the US, Europe, Japan and Southeast Asia (often for the vast majority of the year) in company with acts such as Hexis, Reproacher, Fister, Celeste, Opium Lord, and Mammoth Grinder. PRIMITIVE MAN also played Denver Black Sky in 2013 alongside Relapse brethren Dying Fetus, Exhumed, Skinless, Iron Reagan, Call of the Void, and Weekend Nachos.

All of Ethan McCarthy’s projects have been prolific, and PRIMITIVE MAN is no exception – the band released four splits between 2013 and 2015, and dropped another bombshell of nihility in 2015 with its Relapse EP Home Is Where The Hatred Is. The EP was well-received by publications including Metal Injection, MetalSucks, Revolver, and Exclaim!, the latter of who stated, “unapologetically bleak and permeated by loathing and hostility, Home Is Where The Hatred Is will either leave you wanting more or contemplating teetering off a ledge.”Despite their primeval, bludgeoning approach, PRIMITIVE MAN wouldn’t exist without their savage awareness of modern humanity: simultaneously old and new, atavistic and groundbreaking, PRIMITIVE MAN stands to redefine current conceptions of hope, faith, and metal music.

Now in 2020, PRIMITIVE MAN return with the extreme, terrifying and confrontational new album, Immersion. True to the band’s ethos, every moment on Immersion is overwhelming; shifting from passages of harsh doom to an endless corridor of horrid screaming, blast beats, and a formidable low end. A stark look at a mirror, Immersion’s themes tackle sobering views on existential crises, a general distrust among another, and the current state of the world. True to these dark times, PRIMITIVE MAN’s Immersion is an introspective look into ruin and undoing. As McCarthy explains, Immersion dives into the point of no return. “Now you’re a grown man and you’re fucked.”