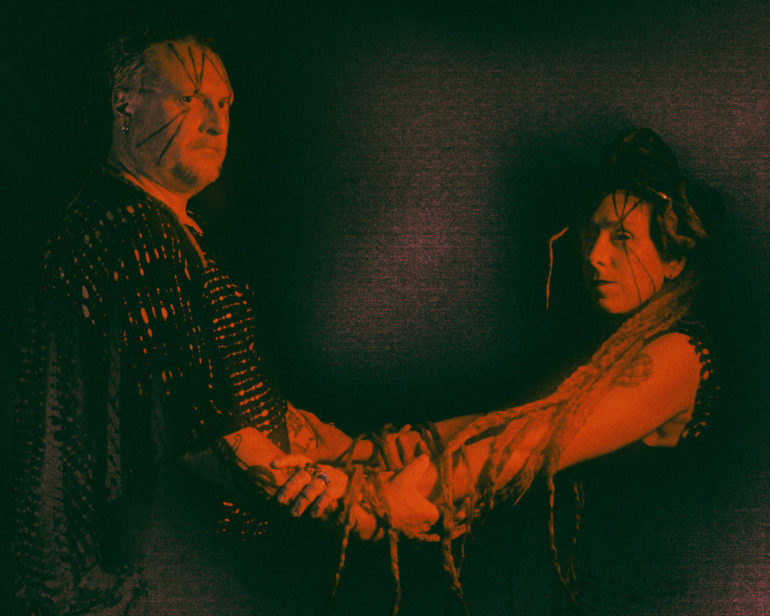 Italian noise-rock duo OvO has been at the center of the worldwide post-rock, industrial-sludge, and avant-doom scenes for nearly two decades. Their “always-on-tour” mentality, coupled with a DIY ethic, fearless vision, and pulverizing live shows have made them the Jucifer of Europe; impossible to categorize, but always there, appearing in your hometown, like a ghostly omnipresence. OvO’s fiercely independent ethos and grinding live schedule have earned the band a significant worldwide fanbase that have come to expect nothing but the most daring and innovative dark music presentations.

Based in Ravenna, Italy, OvO was formed in 2000 by Stefania Pedretti and Bruno Dorella, and to date have released nine full-lengths. Their latest, the 2016 DioDrone release Creatura saw acollades from the likes of Pitchfork, who compared Pedretti to Yoko Ono, and from Decibel Magazine, who called the band “a David Lynch dance party.” OvO has also been featured in The Quietus, Stereogum, Cvlt Nation, and many more forward-thinking web properties. The band has performed at festivals on nearly every continent, and have toured extensively, with the likes of Lighnting Bolt, Zu, and many others.

On the dawn of the project’s 20th anniversary, OvO is pleased to announce a new worldwide album deal with Toronto-based Artoffact Records, who released the 10th OvO album, Miasma, in early 2020. Following “Miasma” (February 2020) and the chaos afterwards OvO felt the need of an album that would be different from the others, that would have new elements, some of which might be refined in the future, but also the need to continue the discourse that began with “Miasma”. Infact, if on one hand the band continues to evolve as it has always done over its career of more than twenty years on the other hand the “Miasma” tour was greatly compromised by the fact that the album came out right after the start of the pandemic leaving the band with the desire to continue performing those songs during the next tour. The new album will contain only two tracks both lasting over twenty minutes. In this sense the album could be described as doom or sludge but with OvO nothing is ever that simple.

The electronic elements that have been present over recent years are still there and play important roles in both pieces. Above all however the lyrics are composed of complete sentences in Italian, a thing which rarely happened in the past. Stefania Pedretti took her inspiration from science fiction and horror classics (Lovecraft, Dick, Bradbury, Butler, Barker, Mary Shelley, Stoker, Poe, Bierce…) bringing out the more esoteric side. The musical language dilates (and for this reason this album will most likely remain unique in OvO’s discography) whereas the lyrical side is enriched with explicit meaning compared to the past where the lyrics where left up to interpretation.

At the end of 2021 OvO were forced to take a break due to serious health problems with Stefania but now they are ready to go back on tour in 2022 promoting “Miasma” again in the Spring and then the new album in the Fall, released again through ARTOFFACT RECORDS.