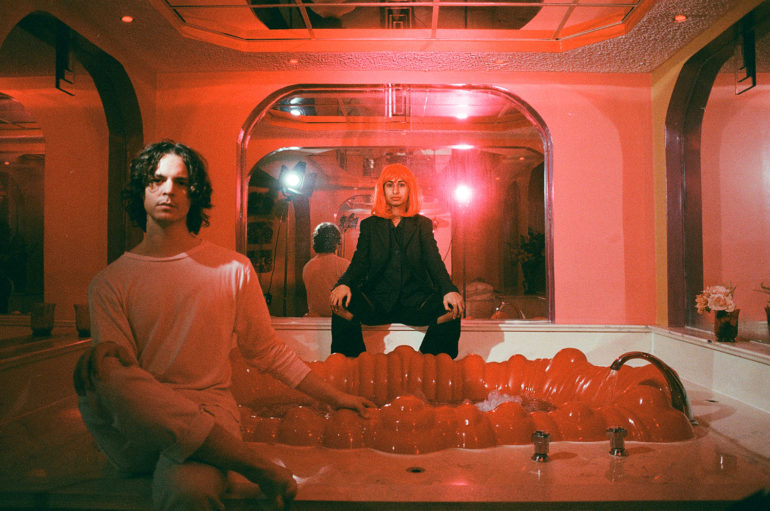 In the infancy of Zen Mother, Monika Khot and Adam Wolcott Smith were on a mission to make the most thunderous, expressive, organic, and transcendental music possible given their limited means. Culling from the dizzying scope of psychedelia, the dystopian collages of This Heat, and the conceptual aims of avant-garde composer Igor Wakhévitch, the duo’s creative process was an intense ritual in channeling cabalistic ideas through exploration and experimentation. The early Zen Mother recordings traversed a variety of timbres and approaches—from swirling walls of hallucinatory distortion to pulsating drone pop to feverish krautrock-imbued meditations and everywhere in-between. And somehow they threaded a continuous aura of futurist Shamanism through it all.

Through years of vagabond touring across North America and abetted by solo endeavors like Khot’s revered solo project Nordra, Zen Mother learned how to distill the most potent aspects of their sound and refined their approach accordingly. That ongoing refinement hasn’t stifled their love for the grandiose—as evidenced by their original score to Alejandro Jodorowsky’s Holy Mountain released in 2019 under the title The Ascent. Across its nearly two-hour run time, Zen Mother offers up blissed out drones (“Lumache”), nightmarish industrial dirges (“Body Factory”), serene synth arpeggios and 8-bit glitches (“Mars”), and pastoral acoustic guitar sonatas (“Travelling and Learning”). Listening to The Ascent, there appears to be no limit to the collective capabilities and artistic drive of Khot and Wolcott.

“I think we are possibly less experimental in our compositional style now,” Khot says of their current work. Zen Mother’s trio formation skews the project towards more formal songwriting, but also allows the band to indulge in their lofty ambitions and visionary impulses. The curious nature and multi-faceted skills of the members makes Millennial Garbage Preach an almost untraceable effort, but Zen Mother never loses focus, even when it reaches for the esoteric. There’s something in the authoritative synth lines and honey-tongued vocals of tracks “Henry Matisse” and “Sleep” that would undoubtedly appeal to both darkwave fans and aficionados of retro-future composers like Vangelis, yet it feels more organic and volatile than either of those reference points. The vibe gets more vicious on “Order,” where a threatening guitar line and authoritative drums offset the dreamy electronics, like we’re hearing a duel between human will and the steady pulse of the mechanical world. “Pharmacy” introduces skittish drum patterns and a spiritual jazz saxophone into the mix, drawing a thread between sonic voyagers of the past and adventurers of the present. But no other song on Millennial Garbage Preach shows the breadth of Zen Mother’s creative aptitude like “The Fugitive.” Here the trio fuses the icy siren songs of Berlin, the ominous lurch of dungeon synth, and flourishes of Old World pagan folk music into a chilling and beguiling apex.

“I felt simultaneously connected with the material world and disillusioned by it,” Khot says of time surrounding the latest Zen Mother incarnation. “It’s a bit of a cry for help and need to feel whole again… like being outside of your house and not being allowed to get back inside, and it’s really cold outside. A persistent gnawing lack of innerness. The uncanny valley of the self.” The duality of warmth and cold, connectedness and disembodiment, light and dark—all of these paradoxes are at the heart of Zen Mother.