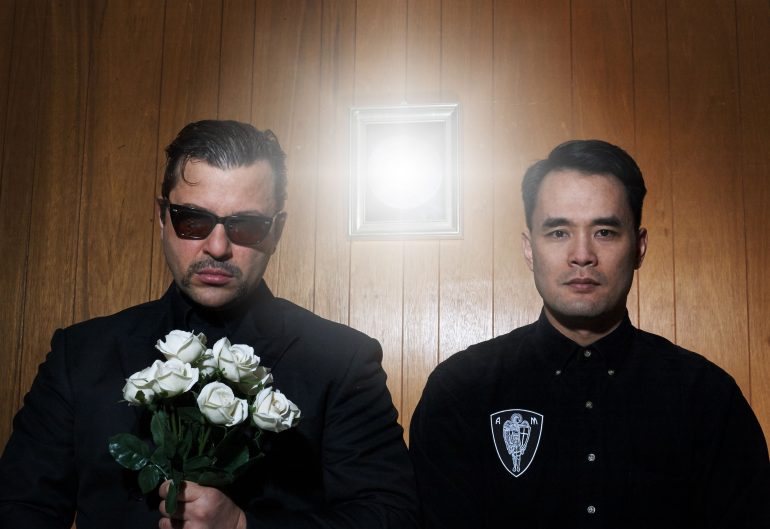 For many St. Michael Front is a sparkling star on the pop firmament since their single release “In The Wake Of A New Dream” from 2016 and their hit “Once”. Michael. Archangel. Slayer of Satan in the form of a dragon. Leader of the Heavenly Host.
The last words that Satan heard before his fall to earth were not by chance:
“Who is like God” – the literal translation of the Hebrew “Mi-Ka-El”.
For Rudolf Steiner Michael was the administrator of cosmic intelligence. The essential revelation of divine thinking! Since 1879 we live in the time of the ore reign of Michael. Until the year 2300!
Welcome to the heavenly spheres of ST. MICHAEL FRONT.
Their debut album “End Of Ahriman”, released in 2018, perfects their style developed two years earlier on their EP “In The Wake Of A New Dream”, and sounds like a mixture of neofolk, Oliver Onions, The Who and Richard Wagner – the ideal soundtrack for execution scenes in an Italian Western. The two esoteric freaks from Hamburg got to know each other while studying art and theology at art-school. Always on the lookout for like-minded souls, they quickly realized that the workforce there was not useful for their mission. So they founded the ST. MICHAEL FRONT. As an apocalyptic pop duo they played numerous concerts and festivals for the dark-minded folk, incl. Wave Gotik Treffen, Nocturnal Culture Night, House of the Holy…