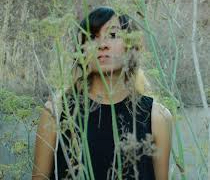 Since the turn of the decade, Lorena Quintanilla has made a name for herself as one half (guitarist/vocalist) of Guadalajara, Mexico’s Lorelle Meets The Obsolete, an incredible psych and shoegaze band with a reputation for exceptional live shows and a catalog of equally impressive albums to match. Since 2017 Quintanilla has also been focusing on her solo project, J. Zunz. In her hypnotic debut album “Silente”, released via Monofonus Press, she trades in the dense swirls of Lorelle Meets The Obsolete’s shoegaze for an experimental post-punk sound, thick with atmosphere, stinging synths, cold repetition, and haunting melodies. In 2020 she’ll be releasing her second album via UK label Rocket Recordings.