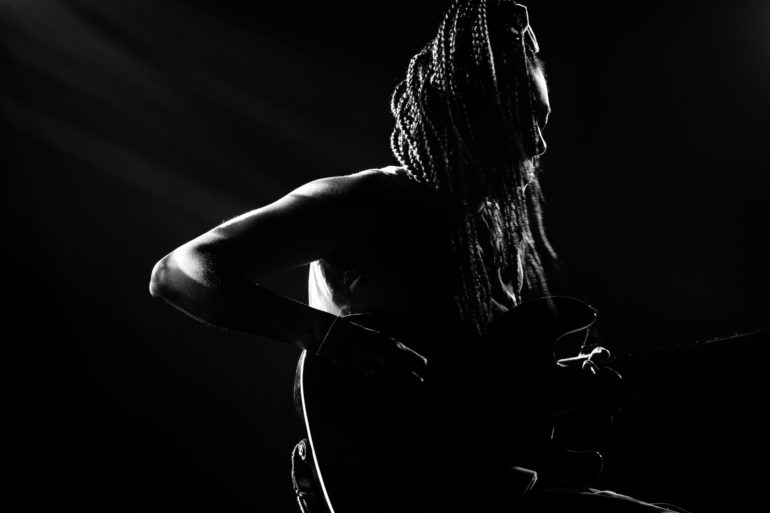 Farida Amadou (b.1989) is a self taught bass player based in Liège, Belgium. The electric bass is her main instrument since 2011. In 2013, she has started to play a lot of different musical genres, including blues, jazz and hip-hop. The same year, she had a big interest on improvised music when she met L’Oeil Kollectif members and started to play with percusionnist/ drummer Tom Malmendier. Nystagmus duo was born in late 2014.

End of 2017, Farida Amadou has joined the punk/noise band ‘COCAINE PISS’. A few months later, Cocaine Piss recorded their album « Passionate and Tragic » at Electrical Audio Studios in Chicago, with Steve Albini. After two years in the band, Farida decided to leave the band (early 2019). In May 2018, she has started a new duo project with the drummer based in London, Steve Noble, including trio collaborations with Alex Ward on clarinet, Chris Pitsiokos on saxophone, ex Sonic Youth’s guitarist Thurston Moore on guitar and recently with the free jazz pioneer Peter Brötzmann.

Farida Amadou was also part of the OORSTOF series (curated by SoundInMotion – Antwerp) project with Ken Vandermark and his band MARKER. For the second part on the year 2019, Farida Amadou has focused on her solo performance, and experimented different collaboration simultaneously. She started playing duo with Floris Vanhoof (modular synth), another duo with Pavel Tchikov (guitar). Amadou and Tchikov released a tape called ‘Mal de terre’ on the Chicago based label trouble in Minds records on November 2021. Later in 2021, commissioned by Europalia, Farida created a sound installation with the support of Overtoon, QO2 and ateliers claus.